After suffering the worst drought in nearly a century followed by a wave of cold temperatures, areas of Brazil’s agricultural belt are braced for new adversities as the La Niña weather phenomenon threatens to bring drier conditions later this year.

In the small mountain town of Caconde, in the state of São Paulo, third-generation coffee grower Ademar Pereira, 44, estimates that half of this year’s harvest will be lost because many shrubs from the modest plantation of his family succumbed to the cold.

“It was already going to be a very small harvest. And with the frost, it got worse, ”he said. “There are a lot of people who have lost everything.

Brazil is an agricultural powerhouse and a major exporter of commodities including corn, sugar, orange juice, and meat, but this year’s weather disruptions have resulted in soaring coffee prices and sugar in international markets while fueling bullish corn traders.

“Brazil is such a big exporter, especially of coffee and sugar, that everything that happens in the country has an impact on the markets,” said Kona Haque, analyst at ED&F Man traders.

The South American nation is the world’s largest producer and exporter of coffee, and early estimates of production losses for next year’s harvest range from 10% to 50% of previous forecasts, pushing prices up. Although the benchmark Arabica price is below its July high of nearly $ 2.20 a pound at $ 1.84, it is more than 50% higher than a year ago.

A lack of rainfall that has dried up the soils of the southern and central states, which are home to much of the country’s agricultural production, has been linked by some scientists to the destruction of the Amazon rainforest.

“By clearing part of the region, you remove the humidity that helps the formation of rains in the center-west, south-east and south. [of Brazil]”said Lincoln Muniz Alves, a researcher at the National Institute for Space Research (INPE) who contributed to the landmark UN report on climate change last week.

Worsening the drought, an unusual succession of polar air masses has moved over swathes of land in recent weeks, pushing the temperature below zero in some places.

Agricultural experts are increasingly concerned that the recurrence of La Niña will prolong drought conditions into the new year. They fear that this will disrupt the flowering of coffee trees, already weakened by drought and frost.

“The worst case is that you have a little rain and then have three weeks of dry weather, which means the flowers are falling and there will be no production,” said Carlos Mera, analyst. at Rabobank.

The previous La Niña, the weather phenomenon caused by the cooling of the Pacific Ocean that developed during the second half of 2020, was blamed for the drought conditions in the United States and Latin America and the increased precipitation in Australia.

Various weather agencies give a more than 50% chance of this happening for a second year in a row. Tirso Meirelles, vice president of the São Paulo State Federation of Agriculture and Livestock (Faesp), said it was a concern.

“Depending on the intensity, it could bring a drier climate for spring and summer, that is, when we are producing the grain crop. It could really affect our agricultural production, ”he said.

Brazil is the second largest exporter of maize, which is mainly used for animal feed, and many of its producers have also been affected by drought and frost. Analysts have downgraded their production forecasts, said Michael Cordonnier, a grain consultant specializing in South America.

Due to the drought, farmers in some provinces planted a month or later than normal, but the frosts in July killed corn at a crucial stage in its growth, he said. Corn futures soared earlier this year, with prices in Chicago hitting an almost eight-year high of $ 7.75 a bushel in May, although they have now fallen back to around 5.66 $ due to better weather in the United States.

“Everyone keeps cutting themselves [Brazil corn production] figures, ”he said, noting that production figures, which before the freeze were typically over 100 million tonnes, were around 20% lower.

The damage caused by inclement weather reverberates in Brazil for farmers and consumers. A shortage of maize for the feed industry has forced it to turn to imports, with normal overseas purchases of around 1 million tonnes expected to drop from 3.5 to 4 million this year, said Cordonnier.

The corn shortage will put additional pressure on higher food prices, which is “already a concern for the Brazilian government,” said Welber Barral, founder of consultancy firm BMJ. Brazil’s annual inflation hit a five-year high of 8.6% in mid-July. 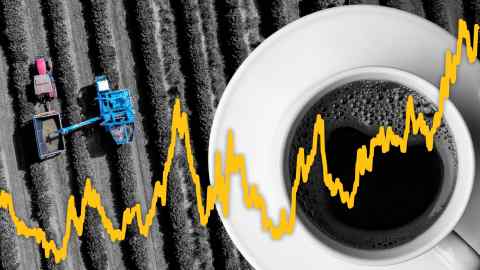 The frost is also expected to affect the production of oranges and sugar from the world’s largest producer, reducing the quality of crops. “If you used two oranges to make a cup of juice, you will need three. This reduced the productivity of the liquids, ”said Meirelles de Faesp.

Extreme weather conditions have also reduced pasture, increasing reliance on animal feed, which in turn is likely to push up domestic prices for beef and milk, he added.

While the higher prices are good news for some growers, they offer little comfort to those whose crops have been destroyed. In Caconde, coffee farmer Pereira fears the impending dry weather that is expected to result from another episode of La Niña.

“The weather forecast is not encouraging. The water stress this year is worse than in 2020, and this scenario has been made worse by the frost, ”he said.

The government intends to allocate 1.32 billion reais ($ 250 million) to support coffee farmers who have suffered crop losses due to frost.

But Pereira, whose farm produces specialty beans for export, worries about the future. “I haven’t done anything in my life other than making coffee,” he said.

Are you curious about the FT’s commitments to environmental sustainability? Learn more about our scientific goals here